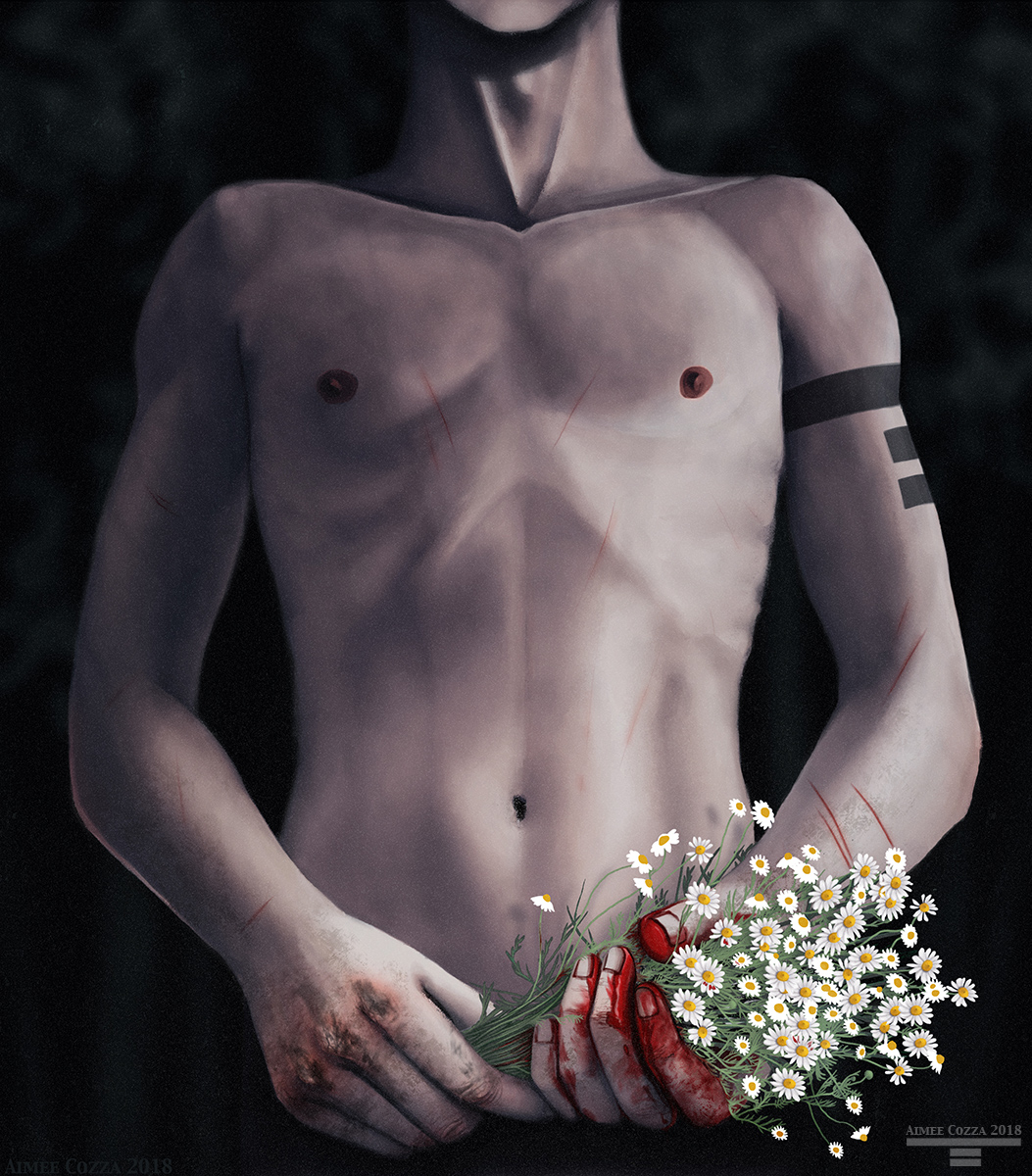 Lo (lol) and behold! A new piece of art!

I don’t really know where to start on this one. It kind of came about when I was doodling up a bunch of ideas I had. Sometimes I’ll jot them all down into their own individual files and then pick at them one by one, or sometimes I’ll pick at a bunch of them all at the same time. Sometimes they’ll get entirely forgotten, or I just won’t be into the idea enough to get cracking on it.

This one in particular came about as I was doing some research for some writing. I was looking up pictures of bouquets of chamomile, like what they would look like in a bundle, and I came across this photo of a bride holding a bouquet of chamomile:

Dunno why, but it struck something in me. I doodled it down for later.

In parts of my story, old souls Azra and Falco aren’t much for gift giving or receiving. Their relationship is more… Find a rock that reminds me of you and bring it home, rather than buy a gift for Christmas or otherwise. When Azra is feeling down in the dumps, Falco likes to buy him bouquets of chamomile. They used to grow wild in the fields back at home, and when they were younger they would often romp amongst it; it’s Azra’s favorite flower. No matter how out of season they are, Falco still hunts them down and gets them, overloading Azra with the sweet-scented flowers.

But the other thing about chamomile, Azra, Falco, and back home is that because chamomile grew in an open field amongst the forest, it was often a sight of violence. Fights would spill out into the fields of chamomile, and bodies would trample the tranquil flowers when they did bloom. It would not be uncommon for red to splash and stain the small white and yellow flowers.

Many, many other things could and would happen amongst the fields of chamomile during the late summer. But usually it’s Falco’s way of grounding Azra and trying to pull him back in. I’ve explored this idea of chamomile before in other pictures:

But I haven’t quite gone into it like this, in a bouquet/bundle sense. I also wanted to give him a sort of… Almost like receiving a bouquet of flowers after a recital, or a performance. He’s got dirt deeply embedded into one hand, and blood on the other. He’s got marks all over him. What kind of trouble has he gotten into?

I also chose to illustrate him naked for a few reasons. The first, and most obvious, is that I enjoy drawing the nude form. It’s a fun challenge and exercise. The second is that if these are wild chamomile stalks, they would have bloomed late summer. Late summer is generally hot, and Azra, in particular, as pictured, doesn’t have a lot of ways he can get cool during the summer. He can’t swim and has a water allergy, and he can’t go out in the sunlight. In modern days he would just stay inside in an air conditioned room, but back years ago it was not uncommon for Durandalites like him to just strip down nude to stay the coolest. Everyone was comfortable with their bodies and no one cared if anyone was looking, so why not, right?

So I took a couple reference pictures for the pose of myself, and set to work transforming me into him…

Now the thing is, my boyfriend saw me doodling over a picture of myself. He told me I was “cheating” by tracing my own photo. I launched into a tirade, of course, about how tracing your own pictures and even tracing reference pictures you take is not cheating at all. I mean, Norman Rockwell would project his reference pictures onto his canvas and paint under them… Is that cheating?

Anyway, while the pose was the same, I still had to turn myself, a fully clothed female, into this naked male. So I had to research, and draw, and draw some more, and blend, and work, and reference, and research, and look, and draw! Overall, I think it came out okay given all the time and effort I put into it (and for all the iterations he had gynecomastia).

Lastly, I had to think of a title. It took me a bit… But I came up with “Low”. A low angled shot, and he’s getting these because he’s been low. I thought of another title, “Grounded”, but as I was churning over that title idea, I thought, hmm, maybe it would do better for a different work. So maybe you’ll see a work titled “Grounded” soon enough. 🙂